Dr. James Bullitt and his family spent a month or so in England on their European tour between June and July 1929. He visited numerous museums as well as famous historical and archaeological sites across the country. While in London, Bullitt joined a class offered by the American School of Prehistory at the American University Union led by Dr. George MacCurdy, an archaeology professor from Yale University. The class began by touring various prehistoric sites in England, including the beach at Cromer, before heading to France. The photographs in the galleries below were taken by Bullitt during his time in England, documenting the various sites he visited.

Click on any image below to enlarge it and begin a slideshow of the gallery.

In one of Bullitt’s first trips outside London, he visited Salisbury Plain, including its most famous site, Stonehenge. The site left a large impression on him, resulting in one of the most extensively photographed sites in his collection. He described his visit in his journal:

“In the afternoon after work in the pits was over we drove across the rolling downs (miscalled the Salisbury Plain) to Stonehenge and spent an interesting hour there. The impression on approaching it is rather disappointing. It looks so much smaller at a distance than I had expected, but when we stood in the great circle & looked up that those huge masses of stone all disappointment vanished and the marvel and mystery of the wonderful temple was overpowering.  While we were there, two Irish Dominican sisters from Cape Town came up; and seeing that Mrs. Kelley was giving me quite an elaborate lecture upon the subject, they drew near & asked to be instructed too. So I discreetly withdrew while Mrs. K. gave them a dissertation on ancient Celtic sex worship. I think they were rather shocked at first but soon their interest overcame their modesty or prudery and they seemed much absorbed in her story. The story is old to me, so I was glad to escape and have leisure to examine the details of the stones & then to stand back & admire the majesty of the tout ensemble.” 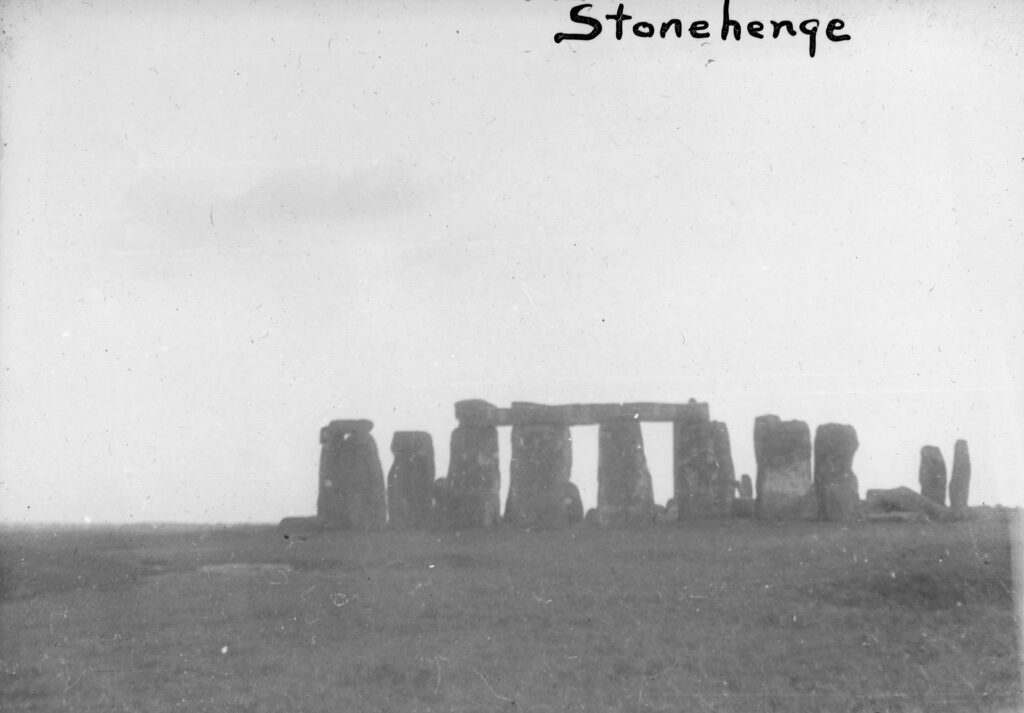 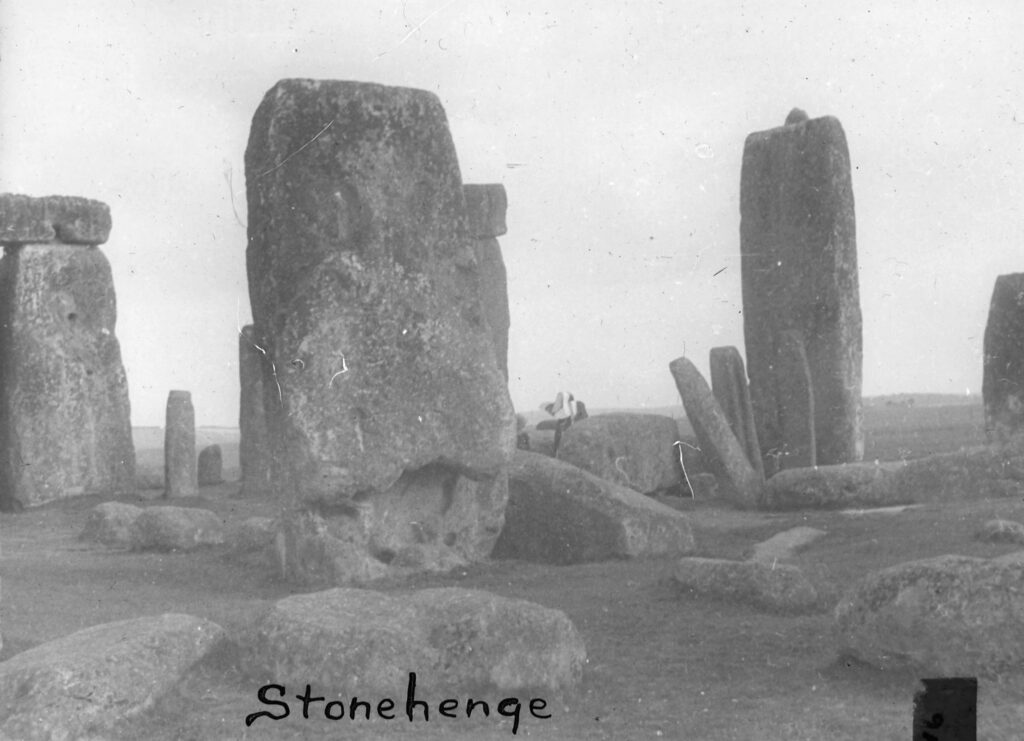 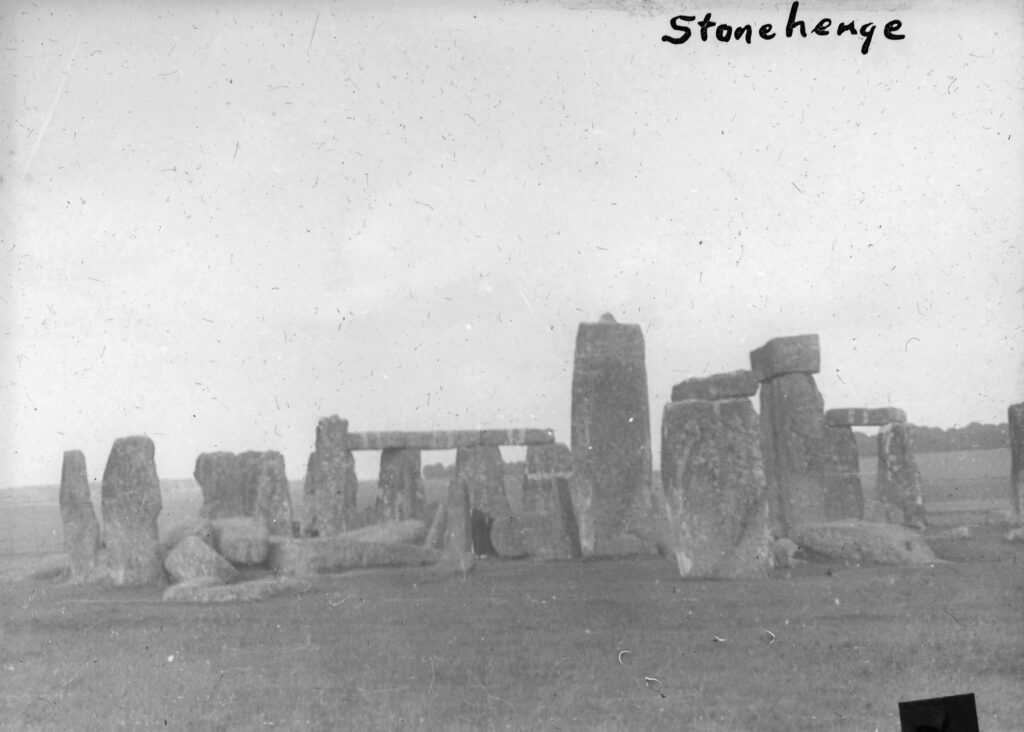 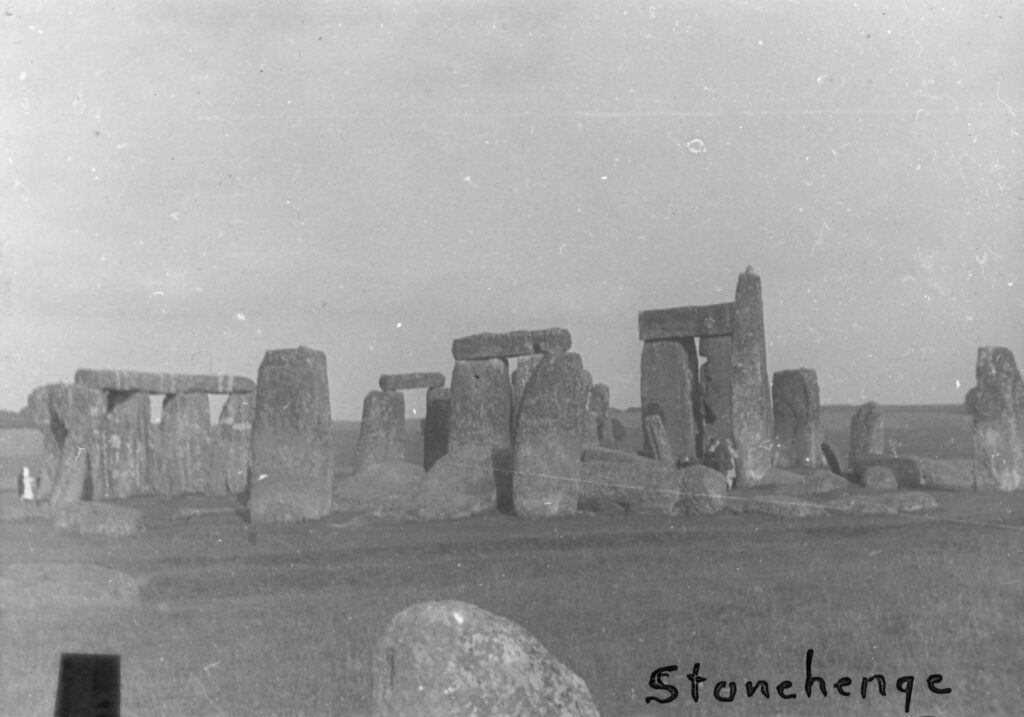 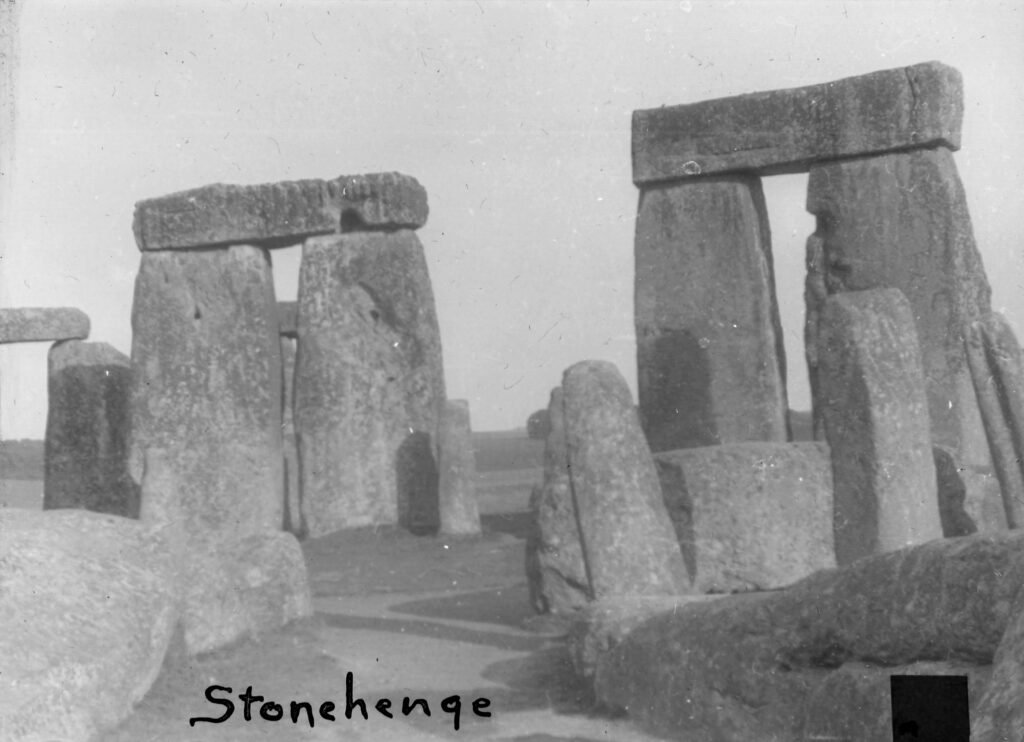 The site of Avebury includes the largest stone circle in Britain. It originally contained 100 stones and encircled two smaller stone circles. Located near Stonehenge, Avebury is believed to be part of the same prehistoric sacred landscape. Because much of the henge is no longer standing, Bullitt was much less impressed with Avebury than the more complete Stonehenge:

“Our next objective was Avebury, some thirty miles north, across the rolling downs, dotted everywhere with the barrows—mostly the round variety, though we passed two long barrows & several of the disc type. The village of Avebury has an attractive & quaint setting, located within the circle of Neolithic ditch & rampart. Originally within this circle there were two circles of great monoliths, but nearly all of them have been broken up for building stone in the past centuries & only a few remain. The ditch & rampart are complete, but not enough of the stones a[re] left to indicate their circular arrangement. It is interesting but not nearly so impressive as Stonehenge.” Throughout his time in England, Bullitt made trips to various gravel pits with his companions, archaeology students Mr. and Mrs. Kelley and archaeologist and priest Abbé Breuil, to view and acquire artifacts. He described some of these trips in his journal:

“The Kelleys & I hired an asthmatic old car & have had a busy day visiting some nine or ten gravel pits east & southeast of here. We got a couple of bushels of flints—nearly all of them Acheulian, most of them rather ordinary, a few quite fine.”

He continued, “Monday we (ie. the K’s, the Abbé & I) rented a car & drove down to the ‘Barnfield Pit,’ a huge gravel pit, forty feet deep & a quarter of a mile across, where Acheulian coups de poing are moderately numerous in the upper strata while the crude Clactonian type of implements are common in the lower levels. This lies on the 100 foot terrace, some miles below Greenwich. We found Mr. Chandler & his wife there. He is a plumber at Erith but is much interested & well informed on prehistory and has written some good papers on the implements of this gravel pit. We did some scratching in the lower levels & I got a couple of dozen pieces, several of them quite good, all showing the peculiar ‘open book’ striking platform of that industry. The manager of the pit gave each of us a couple of specimens from the Acheulian level which the workmen had found.” 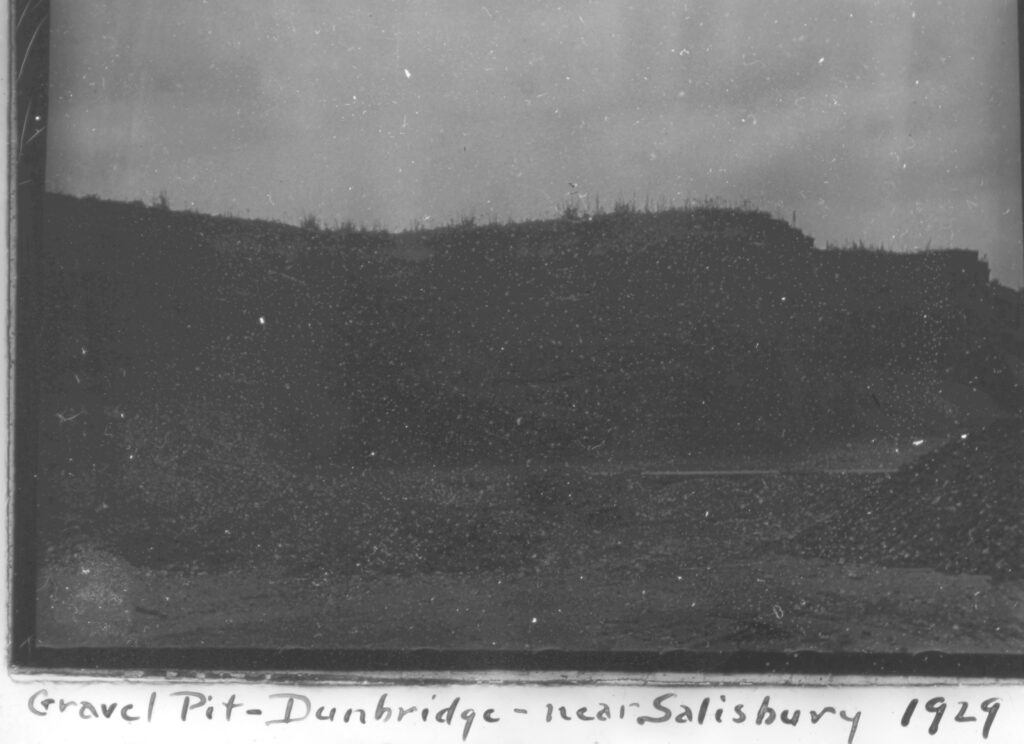 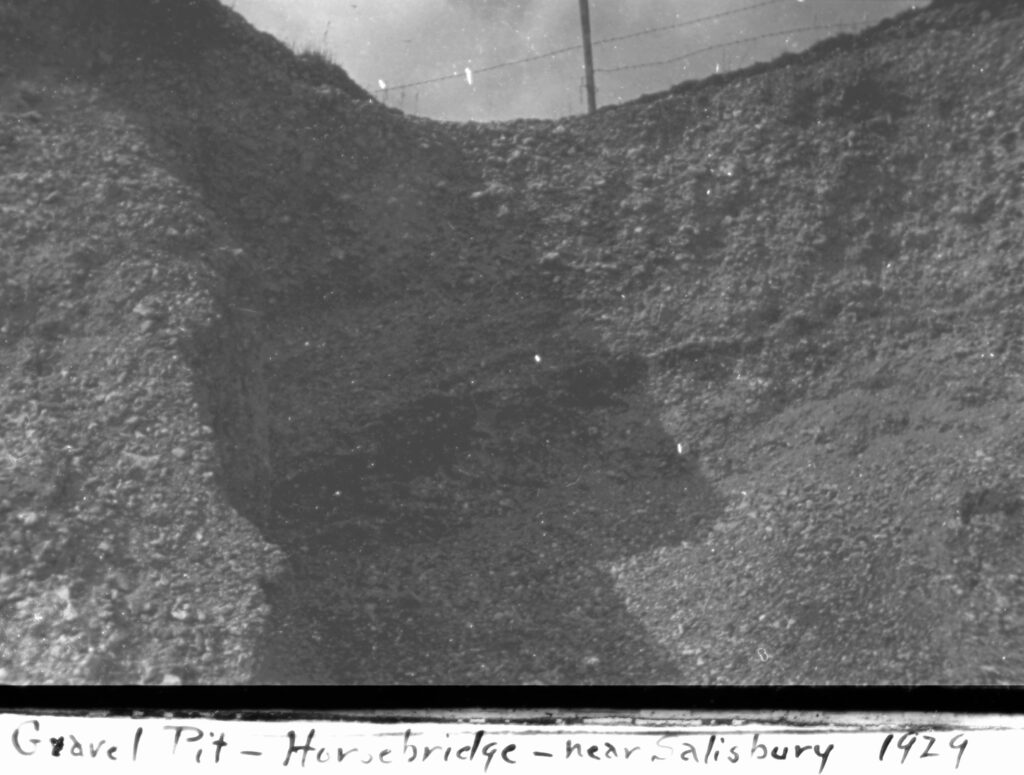 Bullitt, along with his prehistory classmates, visited the beach at Cromer as one of their first site trips. He described the  site in his journal:

“We walked back along the beach, looking for flints in the masses of pebbles that have fallen from the cliff, and studying the structure of the cliffs which are about 150 to 200 ft high. The solid chalk is lower than the foot of the bluff, but is exposed here & there on the beach. Upon it rests the thin layer of Red Crag in which Moir finds his early rostro-carinates, and some crude flakes. Above this is the Cromer Forest Bed, 1 to 4 ft thick, whose flints & bones of early Pleistocene (& Pliocene?) mammals are found.”

One feature Bullitt photographed at Cromer, but did not mention in his journal, was a paramoudra. Paramoudra are large flint nodules with a hollow center that are also known as pot stones. They are natural features, not human-made. 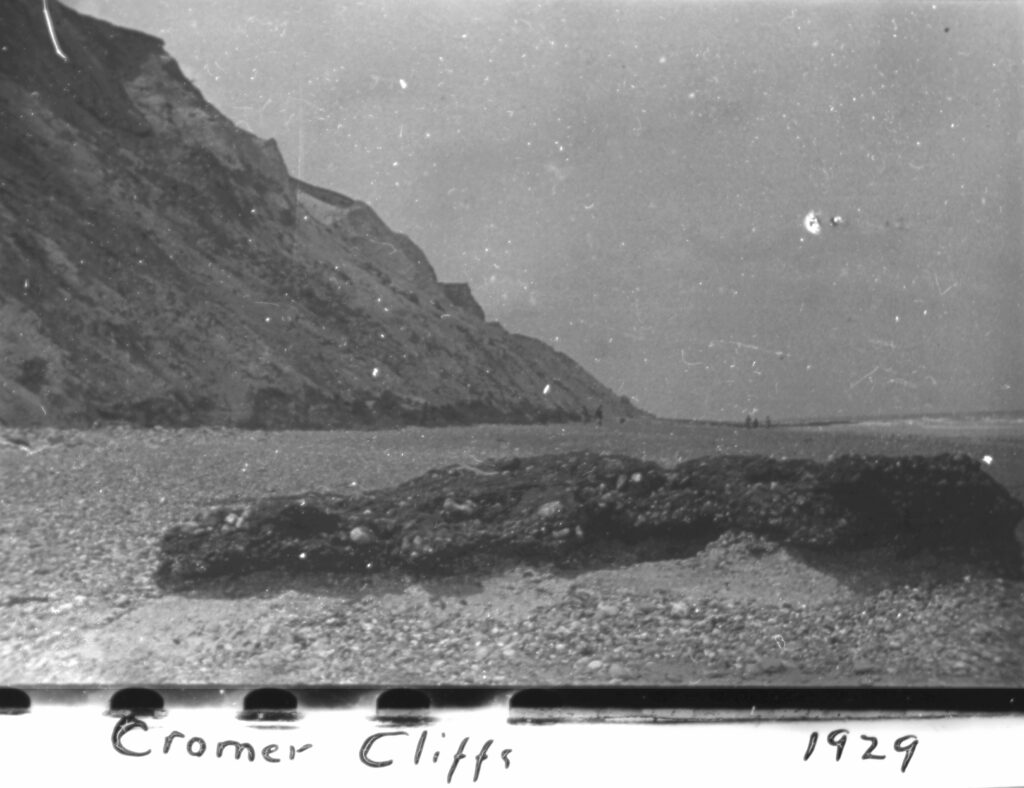 Other Stops in England

Unlike his tour of France, Bullitt appears to have taken only one photograph of local scenery while in England, despite describing it extensively in his journal. 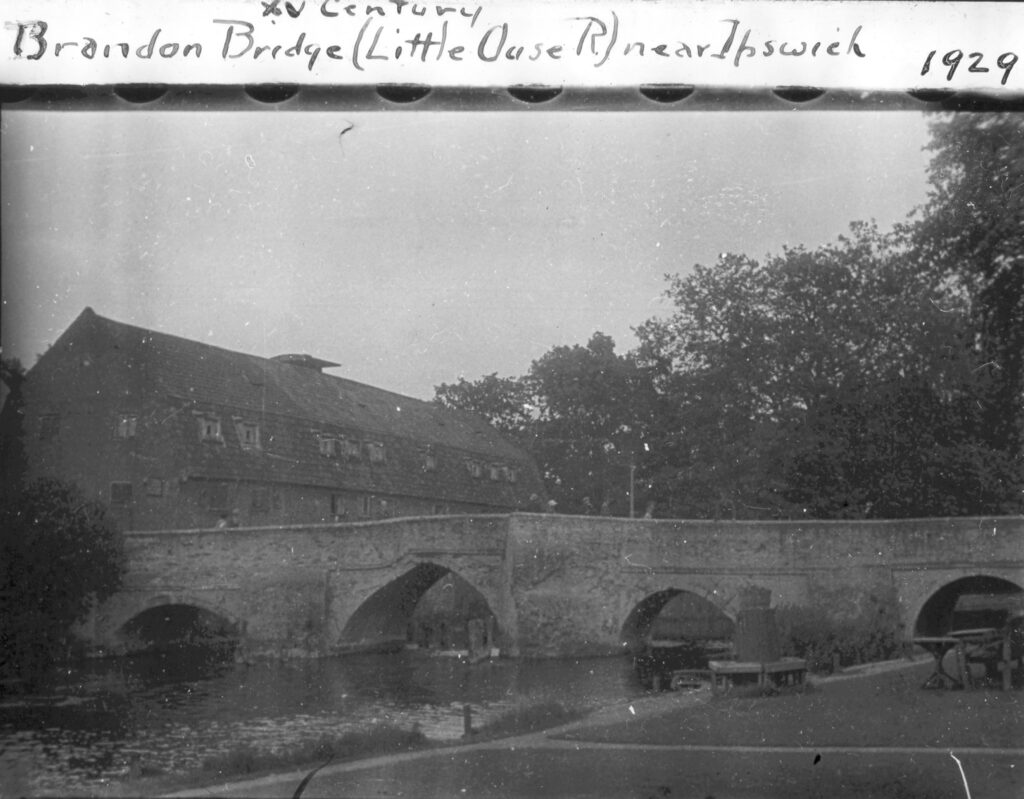