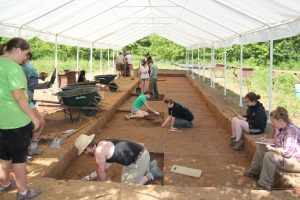 Have you ever wanted to participate in an archaeological excavation? This course will give you the opportunity to do just that while earning six (6) hours of college credit! This year’s Research Laboratories of Archaeology (RLA) field school, taught by Drs. Heather Lapham and Steve Davis, will take place during Summer Session 1 (May 15-June 20, 2019). Excavations will be based at the Wall site, continuing the RLA’s long-standing Siouan Project begun in the 1980s to understand how Native Siouan-speaking peoples living in what is today central North Carolina responded to European colonization.

The Wall site, located along the Eno River in historic downtown Hillsborough, North Carolina, is a Native American town occupied by ancestral Shakori and Eno Indians (tribes local to the Chapel Hill area) in the 1500s and early 1600s, just prior to the arrival of European settlers. Previous testing and excavations over many years between 1938 and 2016 have revealed several circular alignments of postholes where houses once stood, evidence for multiple defensive walls (called palisades or stockades) surrounding the village, features associated with community feasts that later became a convenient place to dispose of refuse, and trash deposits along the edge of the settlement. Understanding Native lifeways prior to European encroachment allows archaeologists to identify and understand cultural changes that took place later in time as a result of Indian-European interactions. 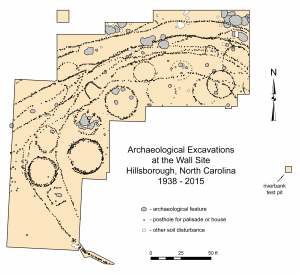 This summer’s field school will focus in part on a dense trash midden located along the site’s southern edge that contains large quantities of discarded pottery vessels and well-preserved food remains, represented by animal bones and charred plant materials. Excavations will also sample previously unexcavated domestic areas within the village.

Students will recover artifacts and reveal traces of houses and other features that document Native American occupation at the Wall site on the eve of European colonization of North America. 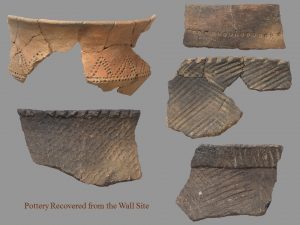 The Field School is open to undergraduate students and anyone with a college degree. Participants must enroll in Anthropology 451 for 6 credit hours. This course fulfills the Experiential Education, Historical Analysis, and World Before 1750 general education requirements and the Archaeology Major/Minor requirements for a field school. There are no formal prerequisites, but potential students must fill out an Application Form before March 30. Enrollment will be limited to about 12 students. Applicants will be informed as to whether they have been accepted into the course by April 1. The course will be taught by Drs. Heather Lapham and Steve Davis, with additional instruction from graduate assistants.

Field school students will learn the basic techniques of archaeological excavation, as well as mapping, surveying, photography (including 3D photography), and artifact identification. Although some classroom and laboratory instruction will be given, most of the students’ time will be spent actually excavating.

Students who successfully complete the course will be prepared for a variety of future research and employment opportunities, including paid positions on other archaeological projects. 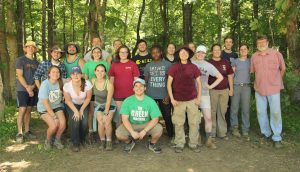 Tuition for undergraduates is estimated (based on last year’s amounts) as follows: $1500.00 for North Carolina residents ($250 per credit hour), and $3930.00 for out-of-state residents ($655 per credit hour). These estimates may change by the time of registration. Students will need to arrange their own housing and food.

The Field School will run from May 15 to June 20, 2019 (Summer Session I). Daily transportation to the site, as well as all field equipment, will be provided by the University. 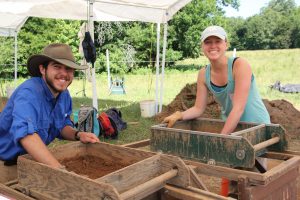 Interested in learning more? You can watch a video about the 2015 Field School at the Wall site and learn more about the Siouan Project.

Inquiries about the Siouan Project Field School are welcomed, and should be made to Dr. Heather Lapham (Email: hlapham@unc.edu).

Because enrollment is limited, students must apply in advance by filling out an Application Form and obtain permission to register. UNC applicants must arrange for a brief interview; non-UNC applicants should submit at least one letter of reference. In order to be guaranteed full consideration, potential students should apply no later than March 30, 2019.

Check out the latest happenings on the RLA's Facebook page.

Congratulations to our
students and faculty on their latest accomplishments!